To make the best screen choice, you need to understand resolutions, the standards and abbreviations currently used.

To start : the pixel

In order to understand screen resolution, we need to start by describing a pixel. As they are very small, LCD sreens can have millions of these. Each one is composed of three RGB (Red, Green, Blue) LED. The combination of these three primary colours allows to create a large amount of shades.

Each pixel receives three coded instructions (one for each primary colour) in order to form a colour. Its depth will depend on the used encoding.

A display native resolution is defined by the number of pixels.
Written as : Number of horizontal pixels x Number of vertical pixels.

Standards abbreviations are often used to talk about a screen resolution or ratio. 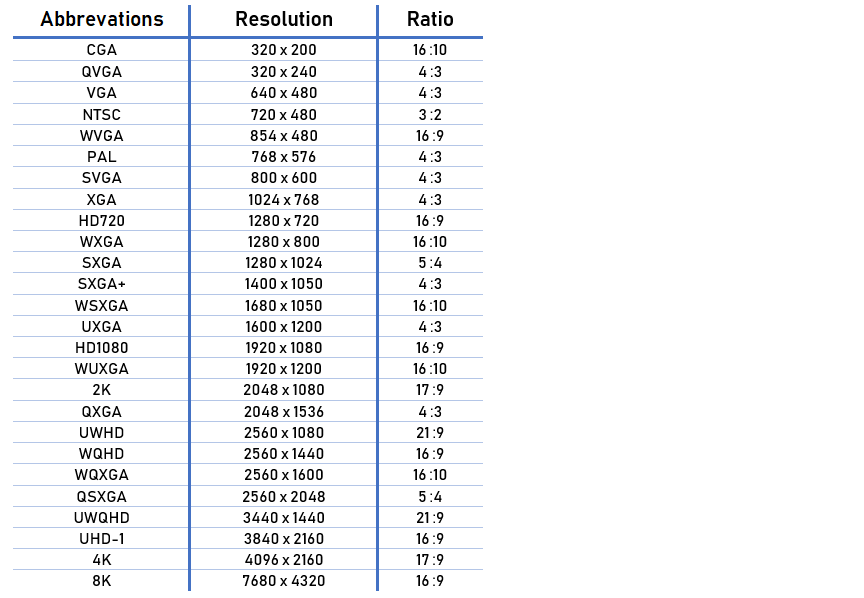 Above, for the same diagonal length, various resolutions are showed. The higher the resolution is, the higher the pixel density is and so the better the image precision and realism will be.

There are three main features to consider while choosing a screen.

Then, the ratio will depend of the use of the display. For television, monitors 16:9 or 16:9 are preferred. In industrial monitoring or security applications, the 4:3 is more popular.

>> Discover our display ranges for severe, industrial or military environments

Infrared thermometry of people for the prevention of potential risks

Altronics prentns you its range of sensors

Enhance the safety of workers in risk areas

CAN bus and its benefits

Our solutions for industry and process control

Our displays and panels P dedicated for marine applications

Our displays and monitors for military applications

Tell us your name and phone number, then we call you back as soon as one of our expert is available.

Tell us your name, phone number and best call timing